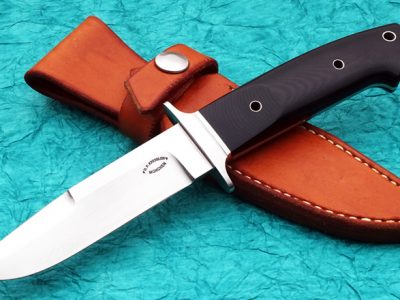 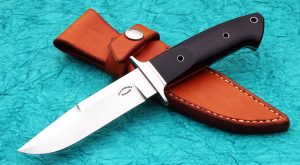 Knife Collectors collect. At the outset, it seems a simple statement. The real question is what does the knife collector collect and, and why? The best thing about a collection is that it is yours. You decide what knives enter and which ones leave. Often it is a combination of the design/style, material(s) and maker. Then again it can be knives with a singular attribute that makes up the collection. For the last 35 years, I have watched with more than idle curiosity the custom knife market. Most products move through what is called in the business world the Product Life Cycle. These stages consist of the introduction, growth, maturity, and decline. Some products move past this by repackaging the product so its life cycle starts over.

Televisions are an excellent example of this.

Custom knives do participate in the product life cycle to a degree. Usually, this is found in the materials area; steel of the day, Wild Woods, Giraffe bone, Camel bone, etc. These and others are examples of materials that have gone through the product life cycle. Primarily custom knives are a cyclical commodity. The cycle is composed of two parts, folders, and fixed blades. Within the cycle are many smaller cycles. Most are moving separately but intersect with one of the two primary markets. Often, these smaller cycles are indicators of hot trends that will cool and more times than not disappear. An example of a solo cycle would be swords. While they are fixed blades, swords circle generally moves at its own pace. When I arrived on the custom knife scene in 1984 as a knife collector, I was oblivious to the cycles and circles. I needed a knife to use in the field. What I soon learned was that fixed blades were in their glory days. Makers like Buster Warenski, Jim Ence, Willie Rigney, Fred Carter, and Billy Mace Imel, to name a few were taking the custom fixed blade to new heights. At the same time, those who preferred folders were becoming aware of the interframe folders. The combination of extended delivery times and cost were slowing the movement of the fixed blade part of the cycle. This slowing of fixed blades provided the opportunity for the interfame folder. These folders moved the cycle to the folder part of the circle, and by the end of the decade would rule the custom knife world. These folders from Joe Kious, Jack Busfield, W.D. Pease, Steve Hoel, and many other world-class makers; combined their expertise with that of world-class engravers to create one of a kind art pieces.

These knives were so popular that a company named Barrett Smythe was created and specialized in these knives. The price ranges were $12,000 to $20,000 in the late 1980s.

Rise of the tactical folder

The 1990s found the combinations of the most desirable fixed blades being out of reach for most and the crash of the interframe folder market created a reset of the circles within the cycle. This gave rise to the new word and that word was Tactical! A group of makers led by Kit Carson, Bob Terzuola, Chris Reeve, Mel Pardue, and Pat Crawford introduced us to the tactical folder utilizing Titanium and bead blasting. These knives were the beginning of what was to become a trend that would never really go away. Automatic and Double Automatic folders were finding a niche with Butch Vallotton leading the way. This slowly gave way to the introduction of the Speed Safe by Ken Onion. The “gray turds” lead the way to put the tactical folders on top of the custom knife world. This was not for lack of trying as both makers and organizations alike tried to drive the metaphorical stake through the tactical folder heart. Not to be pigeonholed tactical fixed blades emerged with the introduction of the Tanto style blade by Bob Lum, the Japanese tactical introduced by Phil Hartsfield, the combat-oriented fixed blade with the new Kydex sheaths from Bob Terzuola and the continuation of the legendary grinds of Walter Brend.

As we survived the crash of Y2K, the tactical folders did not. Their grip was relinquished and gave way to a group of knives that had been around for 30 years but was finally going to move the circle back in favor of fixed blades. The forged blade was going to rule the custom knife market for the next decade. This cycle began with carbon steel hunters which gave way to carbon steel Bowies. The cycle moved again and the focus shifted to Damascus hunters and then Damascus Bowies. Pattern Damascus beyond Ladder, Twist and Rain Drop started to appear. West Texas Wind, Dog Star patterns became knife collector favorites along with Mosaic patterns. The ranks of the American Bladesmith Society swelled due in no small part to the popularity of forged blades. Coupled with numerous Hammer-Ins and the opening of the Bill Moran School of Bladesmithing at the end of the decade. As the decade came to a close the demand for forged fixed blades so many bladesmiths decided to join in on a smaller cycle that had was enjoying a resurgence. Slip joints and multi-blades had become HOT. This was due directly to the efforts of Tony Bose. Many ABS makers moved away from the slowing forged blades to the slip joints. Unfortunately, the migration of numerous makers without enough knife collectors to support their work; brought about the end of these cycle(s).

Return of the tactical folders

Starting in 2010 with the migration from forged blades the new materials and designs lead the way for the circle to return to folders. Flipper openers, bearing systems, Lightning Strike Carbon Fiber, Superconductor, Zirconium, Timascus, and Mokuti became the materials of the day. Tactical folders melded to become presentation/art knife folders trying hard to not overpower their roots. The demand and subsequent pricing in the aftermarket akin to the interfame folders of the late 1980’s have given many knife collectors pause to rethink their collecting. Pricing in both the primary and aftermarket prices have eliminated many of the former knife collectors from moving forward with their collections. The flipping of many of these folders has been replaced by trading.

As we entered 2017 the cycle is once again moved back to fixed blades.

What does all this mean for knife collectors?

Generally, the end of a market cycle occurs to primary for two reasons; lack of availability of in-demand knives and aftermarket prices. This was true of the high-end fixed blades in the 1980s and the tactical folders of this decade. What does this mean? Lack of availability or price will cause a reset of the custom knife market. This does not mean that all other types of knives will be excluded. There will always be demand for folders. As the highly inflated aftermarket prices of folders come down. There will be buying opportunities here as well. But first knife collectors and dealers will have to come to terms with the loss before moving on. My point is that this reset will give rise to knife collectors looking for new takes on established designs, styles and materials used to create custom knives; in this case, fixed blades. There will also be new designs and materials that come out of this reset.

I find these to be exciting times for custom knives. New ideas, new makers, new materials and the confluence that will result will take custom knives to new places. Want to learn more about adding knives to your collection? Purchase my Custom Knife Buying Guide.