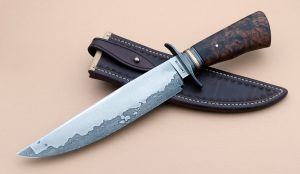 When I arrived on the custom knife scene in 1984 as a collector, I was oblivious to the cyclical nature of custom knives.  Primarily because what I needed was a knife for the field. What I soon discovered was that the custom knife cycle is composed of two main components: folders and fixed blades.

Imagine a circle with a horizontal line through the middle above the line the word fixed.  Below the line folders. In the empty space surrounding the word fixed are other words; hunters, swords, tactical, forged, etc. In the space surrounding the word folders are words like; butterfly, slip joint, tactical, automatic, Damascus, etc. Often, within these words are another subset of words, usually identifying trends or styles. Most are moving separately but are part of the main cycle. An example of a solo cycle would be swords.  While they are fixed blades, the sword cycle generally moves at its own pace.

While most collectors and custom knife makers do not view they create or collect as commodities or products.  For the most part they are governed by the rules of business. In this case the product life cycle. This consists of 4 stages; introduction, growth, maturity and decline. Examples of introduction are a new maker, design, material, etc. Growth refers to the previous gaining popularity with makers and collectors.  Maturity refers to the market starting to be filled with knives that look similar and/or feature the same materials.  Finally, decline, the market has been saturated.

My introduction to the product life cycle started in 1985.  The interframe folder was introduced.  Basically, a lock back folder with a 440C steel frame, that had a pocket milled into the frame.  In the beginning the material that filled that pocket was either Stag or wood.   As demand picked up this type of knife entered the growth stage.   New materials were introduced to fill the pocket, such as Mother of Pearl and Ivory.  Then engraving was added to the knives followed by Gold inlay.   As the market entered the maturity stage, semi-precious and precious gem stones were utilized to fill the pocket in the frame.   The prices for these knives had reached epic prices, $14,000 to $18,000 were not uncommon for these folders. Then in 1990 the final phase started, and the decline was rapid.  Seemingly overnight the demand for these knives had disappeared.  As well many of the collectors who drove this market seemingly disappeared as well.

Rise of the tactical folder

The 1990’s saw the introduction of several things that had a huge impact on the custom knife market.  The main 4 influences were Titanium, the liner lock, the frame lock and the word Tactical!  A group of makers led by Kit Carson, Bob Terzuola, Chris Reeve, Mel Pardue and Pat Crawford introduced us to the tactical folder. Utilizing Titanium for the frame and providing the entire knife with a bead blast finish. These knives were the antithesis of the interframe folder. They were meant to be used and sold in the $250 range.   These knives were the beginning of what was to become a trend that would never really go away.  Without a doubt the most important innovation during this time frame goes to Michael Walker.  He is credited with the introduction of the Titanium liner lock.

Not to be pigeonholed, tactical fixed blades emerged with the introduction of the Tanto style blade by Bob Lum. Phil Hartsfield introduced the Japanese Tactical, Bob Terzuola created the combat oriented fixed blade with the new Kydex sheaths, and Walter Brend discovered many legendary grinds.

As we survived the crash of Y2K, the tactical folders did not.  Their grip was relinquished and gave way to a group of knives that had been around for 30 years. The knife cycle was once again moving in favor of fixed blades.

Helped by the opening of the Bill Moran School of Bladesmithing and numerous Hammer-Ins, the forged blade was going to rule the custom knife market for the 8 years.

This cycle began with carbon steel hunters which gave way to carbon steel Bowies.  The cycle moved again and the focus shifted to Damascus hunters and then Damascus Bowies.  Pattern Damascus beyond Ladder, Twist and Rain Drop started to appear.  West Texas Wind, Dog Star patterns became collector favorites along with Mosaic patterns.  The cycle ended in 2009 with the knife cycle moving towards folders again.

Return of the tactical folders

Starting in 2010 the migration from fixed blades began. The knife cycle started to move again, away from fixed blades back to folders.  While Titanium, carbon fiber, liner locks and frame locks were left over from the 1990’s.  The introduction of the flipper opener and roller were going to be added to most tactical folders. Giving the knife a super smooth opening and solid lock up.

The demand and subsequent pricing in the aftermarket akin to the interfame folders of the late 1980’s.  Too many collectors either did not know about the rise and fall of this particular market or chose to ignore it.

The correlation of these two knife cycles were uncanny.

Both started with a basic knife. Then as the market matured, new materials and other work were added to the knives, raising their prices. In fairness to the makers, this is what the collectors wanted.  In the case of the interfame folders it was engraving, semi-precious and precious stone inlays in the frame and Gold inlay.  The new tactical folders added Timascus and Moku-Ti for the frames, Damascus blades, and pricy natural handle materials such as Mastodon Ivory.  These knives dominated the tactical folder market.  An interesting consequence of this was the name and the number of add-ons became more important than the quality of the knife.   As the name of the game in the tactical folder market from 2012 to 2017 was flipping the folder for a profit.

In 2016 tactical folders were the king of the custom knife market.  However, the hot and volatile aftermarket started to change.  To most it was imperceptible, as most were still caught up in what would become the tactical folder aftermarket bubble.  Today, many tactical folder owners have knives that are overvalued.  Giving them three choices, to hold and hope things reverse, sell at a loss or trade.   In 2018 heading into 2019 the hold and/or trade are the two strategies being employed.

Perhaps the best lesson that can be learned from the last 8 years is; more collectors should have done their homework.  Concentrating only on materials, name and the ability to flip the knife did not bode well for many of the current owners.   Many seem to have overlooked quality construction, value for the money and not buying into the hype. Buying any custom knife, one should do their due diligence.  When buying a multi-thousand-dollar custom knife it should be mandatory.

There is a saying “a high tide raises all boats.”  In the case of custom knives tactical folders were the “tide” that raised prices.  This directly influenced the prices makers can ask and collectors are willing to pay. The demand for tactical folders is waning. Consequently, the custom knife cycle is once again moving towards fixed blades. The cycle moves slow, look for fixed blades to be the dominate knife style over the next 2-3 years.

Quietly, for the last 3 years, Bush craft fixed blades have been gaining traction among both end users and collectors.  These knives feature simple construction of a blade and two pieces of handle material.  They are designed and built to be used.  Consequently, these custom fixed blades feature a price that appeals to all custom knife buyers.   Some makers have already moved towards using single guards and tapering the tang.  This added work makes the knife more expensive and perhaps less likely to be used.  Modification and improvement follow the natural flow of custom knives.

Some makers who started out as tactical fixed blade makers made the move to tactical folders.  As the demand for their folders starts to recede, many have started to move back to their roots.  There is no doubt that some of these makers have improved their knife making skills.  Consequently, their new fixed blades will be superior to their older fixed blades.  One should however be cautious as to how these knives are constructed.  The lesson many tactical folder makers learned is that the CNC (Computer Numerical Control) machines are your friends.   The ability for a maker to own one or more of these machines, to know how to program and run them.  Is a skill that should not be looked down on.  There is a down side to this, as was first evidenced in most recent iteration of the tactical folders.  That is having the work outsourced.

These machines can do incredible work on and in metal.  Which is where the caution comes into play.  Blade blanks and scales can be outsourced and done in great numbers.  On the plus side this does allow the knife maker the time to focus on what they do best; the fit and finish.  These tactical fixed blades will generally feature no guard or a single or double integral guard.  The handle material is generally two pieces of Micarta or G-10. You should be cognizant of how the knife was built and subsequently priced accordingly.

The main benefactor of this movement of the knife cycle will be the forged blade. In my opinion the main advantage the makers of forged blades have is their ability to produce knives with guards.  Once you move out of the hunter category, stock removal makers seem to prefer either integral guards (with or without material over them) or bolsters.

The bladesmiths around the world have done an excellent job of sharing information and helping one and other allowing newer bladesmiths to not have to reinvent the wheel while learning the intricacies of forging blades.  While forged blades with basic carbon steel are still available worldwide,  The trend heading into the next decade will focus more on carbon steel blades with incredible Hamons (temper lines) and San Mai blades which feature a carbon steel core sandwiched between stainless steel. Damascus is more popular than it has ever been.  Even newer smiths are building knives with Damascus. Fossil Ivories, once the domain of the tope blades smiths, have become a go to material for many smiths. Collectors are now aware of the materials cost and are willing to pay it, no doubt this is a direct response to the price of quality Stag. The raising of the price point with which collectors are comfortable paying, is directly responsible for this.

As stated previously, each major component of the overall cycle has smaller components within.  This is important to understand as while some materials may disappear, styles probably won’t.  While fixed blades will move into a position of prominence over the next 8 – 10 years.  Folders will still be in demand. Example, slip joint and multi-blade folders are having a resurgence in popularity.

While it is your collection, I would suggest you takeaway key lessons of this article.  First and foremost, do your homework.   Second, try and stay away from the “hype” of a particular knife or material(s).  Lastly, do your homework.  I know I wrote that twice…as it is that important.

In the year 2000 I attended a custom knife auction in Texas. I purchased a knife at this show for $660, that included the buyers fee.  This particular knife was made in 1989, it was an interframe folder that sold that year for $14,000.00.  One of the two buyers did their research.