I met custom knife maker, Scott Gallagher at the Art of Steel Show in Little Rock, Arkansas in 2016.  He was an Apprentice Smith at the time and I made a note to myself to check out his work closer 7 months later at the ICCE Show in Kansas City.  I was not disappointed, as Scott had received the inaugural Judge James Pilkinton Award.  It was easy to see why he won this award given his skill in so many different designs.  On his table he had hunters, fighters, boot knives and Bowies.  All were very well executed and his prices were more than fair for a newly promoted ABS Journeyman Smith.

Scott strives for meticulous work and constant improvement.  This was evident when comparing his work at the ICCE Show to the work he had on his table just 6 months earlier.  Handling his knives at the 2017 Blade show his work continued to get better with the word, “clean” coming to mind.  His fit and finish belied the price point and his new performance line of hunters is going to be a winner. 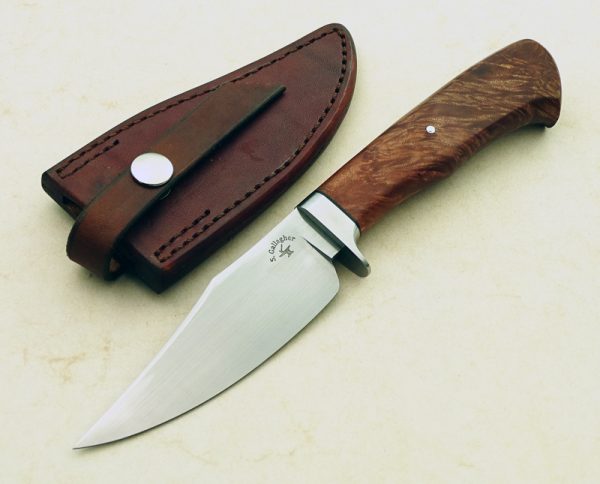 Robertson’s Custom Cutlery is your source for custom knives from today’s leading custom knife makers. We only feature the highest quality knives at value prices. Our custom fixed and folding knife selection includes tactical fixed and folding knives, presentation fixed and folding knives, bowies, hunters and skinners, and a large selection of forged blades. Les Robertson, author and owner of Robertson’s Custom Cutlery, is also a Field Editor for Blade Magazine and an instructor at Blade University. If you have questions about the content in this article or about any knife or maker on our website, you can contact Les directly at les@robertsonscustomcutlery.com or (706) 650-0252.