In the recent 3-part article in Blade Magazine, HOW TO COLLECT CUSTOM HUNTERS, Les discusses 1. Sept. issue) Collectible Users 2. Oct. issue) Investment Users 3. Nov. issue) Collectible Influencers. Often, the first custom knife someone buys is a hunting model.  Perhaps a skinner, semi-skinner, caper, bird & trout, or even a filet knife. These knives are purchased primarily to be used on a hunting or fishing trip where they might end up helping to produce a trophy mount or even dinner!

The most popular custom knife style is the hunting knife.For decades knife makers and collectors have invested in these knives. Bill Moran even sold his family farm to become a full-time maker and we’re all glad he did. He is credited with the revival of the forged blade in the USA. Buster Warenski, who is considered the finest maker of the 20th century, started out primarily building hunters and skinners while working with Harvey Draper for three years. If the buyers of those knives could have only known how valuable they would become today.

There are many influencers persuading us to choose one product over another. In the case of custom hunters, style, materials, technique and reputation of the maker may be considered. If the knives were created by a legend of the custom knife world, all the better. Some makers who are lesser-known to the newer collectors influenced todays makers and their knives; therefore, contributing to the knife value. Please check out the complete 3-part series in Blade Magazine.

The W.E. Bill Ankrom Hunter was featured in the third part of the Blade Magazine article “Collectible Influencers” (November 2020 pages 34-38.) He is best known for the precision of his knives. Today, the majority of his work is high-end art knives.

W.C. Bill Davis Drop Point Hunter Bill studied directly with Bob Loveless. Bill was one of my favorite Loveless style knife makers. I lost count how many knives I bought from him over 25 years. His work was a true replica of Loveless’s work. 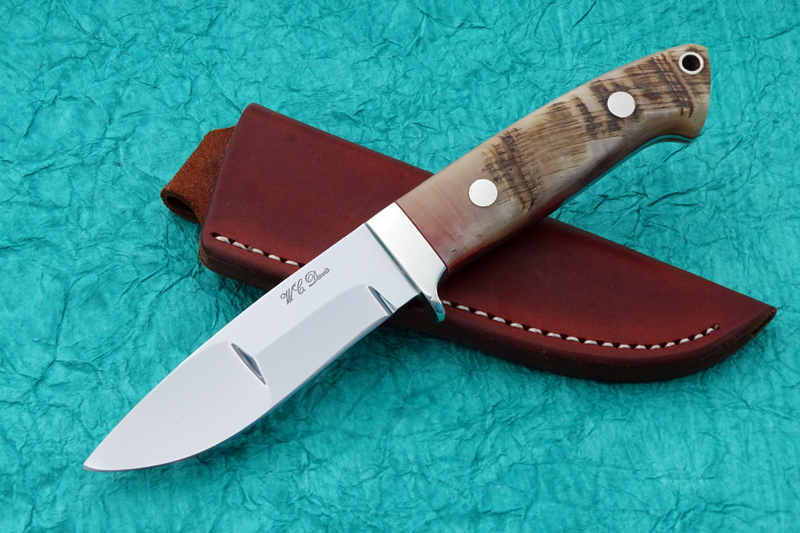 Schuyler Lovestrand H-2 Hunter  In my opinion, Schuyler is one of the top 5 stock removal makers in the world. His work always approaches perfection. In the 30 years, I have been working with him, his knives have never disappointed. SOLD

Tim Hancock Forged Damascus Hunter  Tim was well-respected, awarded many awards and considered one of the finest Mastersmith’s in the world. He was a legend among his fellow Master Smiths. A gifted artisan, who incorporated several design elements into his work. He unfortunately passed away in 2019.