Posted By : Alan Jones
Comments : Off

The 2021 Blade Show was the 35th Blade Show I have attended. There is no doubt that Covid had a substantial impact on the show. Most of the international makers and collectors were not there. It appeared that several US-based collectors and makers chose not to attend for reasons that were their own. That said, the show had plenty to offer, with comradery being at the top of the list.

It was great to once again visit face to face with old friends and meet new acquaintances. While the attendance and table numbers may have been down from previous years, there was still enough to see to fill your days at the show. Having been a judge this year for the custom knife competition, I found I could have used those two hours back to walk the rooms. That said, being a judge does have its merits as you get to look at some of the very best knives that the Blade Show has to offer, side by side.

One of my goals each year for the show is to find new makers to work with. This year I found two such makers; Mike Malosh and Brian Selby. Mike specializes in William Scagle type knives. However, this year he offered handles that were a little more conventional. I bought a hunter with black Micarta and a camp knife with an Elk handle. I purchased both of these early on Friday. It was a good thing I did. Mike sold all 28 of the knives he brought before the end of the day. Apparently, others saw the same things I did. Quality work at a value price. 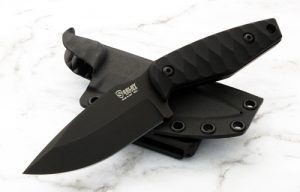 I purchased 3 knives from a maker new to me, Brian Selby. He specializes in EDC tactical fixed blades. His Folsom Necker has a 2.1″ blade with a Kydex sheath that offers multiple carry options. His Full-Size Folsom features a 4″ blade. All have Black DLC coating and textured G-10 scales. I particularly liked his Kydex sheaths as they locked up great and secured the knife. Once again, these knives featured quality work at a value price.

RJ Martin fresh off his exceptional Tactical Knife Invitational Show the weekend before Blade, he brought 6 knives to Blade and of course, sold out. RJ was nice enough to bring me a Q36 with Lightning Strike Carbon Fiber scales and an S110V blade.

I stopped by Stephen Fowler’s table and there was a Bowie he brought that looked great. Not surprisingly he had sold the knife before I got to his table. He did; however, have a smaller knife featuring his exception Fire Starter Turkish Twist Damascus. I ordered the Bowie that was on his table with this steel and Desert Ironwood. I’m looking forward to seeing how this one turns out. Check back…

As it is with most shows, some sell out, some sell at least a few and others sell nothing. Too many makers still do not understand their position in the market that they are competing in. Subsequently, their knives are overpriced and they continue to not understand why. No, it is not the crowd, the promoters, or the medical circumstances surrounding the show. Today’s buyers are very educated on what knives should sell for. Consequently, when they see overpriced knives; many, not all, will walk away from the table. I have been encouraged by the Editor of Blade Magazine to write yet another article on this very subject.

I’m sure the Blade Show will be back in 2022 in all its glory. The showroom will be packed with knives and collectors. Have to say, I did enjoy being able to move about the show freely this year, a plus for fewer attendance.